While messing around with transitioning from episode 1 to episode 2, I discovered that the game crashed every time I tried to save during episode 2. I managed to narrow it down to the problem line of code, but I had no idea why that line was a problem, or how to fix it, because I was using a very complex third-party module that solves a highly non-trivial problem (turning program state into text is a lot harder than you’d think) so I didn’t really understand the module I was using.

Therefore, since I had no idea how to fix the problem, I decided to go back to rolling my own save format. Unfortunately, the new format is completely different from both of the previous formats. I think it’s superior to both (at least in the context of my game), but it’s still very different. So, once again, old saves are no longer compatible with this version, and you’ll have to start over.

I’m really really sorry about that. However, once episode 2 is released the save format is pretty much locked in forever, so I really need to make sure to get it right before that happens.

On the bright side, I think the reason the most recent versions of the game dont work with PlayOnMac is because PlayOnMac doesn’t know how to handle the third-party module I was using. Since I’ve gone back to generating plain text files for my saves, PlayOnMac might start working again. So if there’s anyone out there with a Mac, please try it out with PlayOnMac and let me know if it works or not.

I’ve also fixed a few bugs and typos, including a bug where the game crashed when you tried to end the episode. I’ve also modified the logic of the dungeon events. Now, once you’ve completed the event in each room, the entrance squares will no longer display text. Hopefully, that will make going back to Paloma less of a hassle. You can find the most up-to-date version of the game in the Downloads section.

I’ve also been doing some preliminary designing for the automap. Below are some sketches that I’ve made of my proposed design. Criticism would be greatly appreciated. Note that I haven’t implemented anything yet for the automap, so I have absolutely nothing invested in this design. So feel free to tear it apart. Furthermore, the top-down perspective will look very similar to this, so keep that in mind when critiquing these sketches.

Suppose we are in a dungeon. It’s dark and scary. Or maybe it’s a sunny day in the middle of a forest with dinosaurs rumbling happily. We’ll never know.

Now, suppose we press A to  trigger the (A)utomap command. That gives us the following screen. 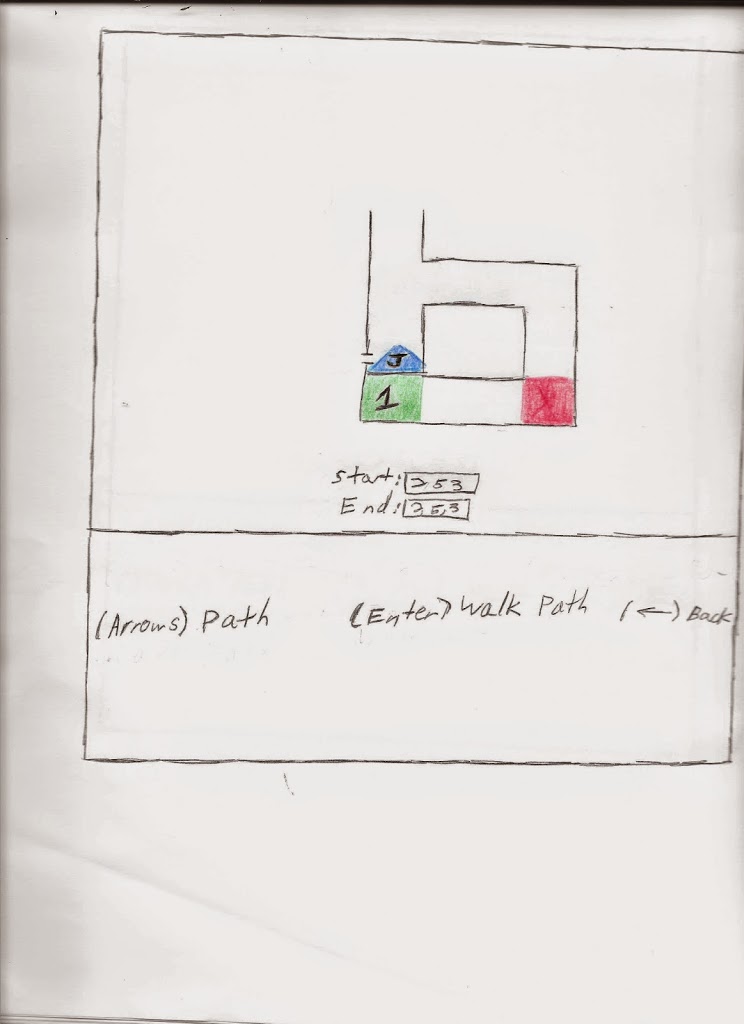 This screen displays what we’ve seen of the dungeon so far. Note the J. That’s the first letter of the player’s name (in this case, I’m assuming the name is Juliana), and indicates where the player currently is. Now suppose, we want to define a route from our current position to the stairs down to the first level. I start pressing the arrow keys. Pressing the up arrow twice, and the right arrow once (or twice, this thing isn’t exactly to scale and it’s hard to tell) gives us the following screen: 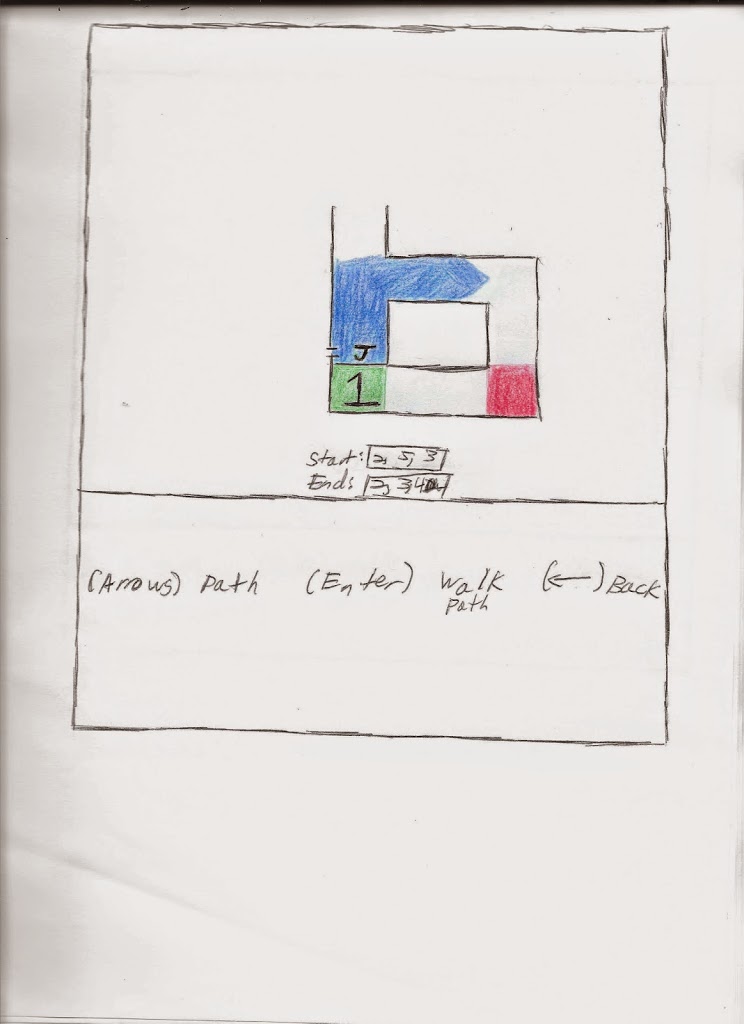 We continue flailing at the arrow keys in a random (yet totally logical) manner to complete our route. Note that while you are selecting your route, your party isn’t actually moving. Therefore, you will not experience any random encounters while selecting your route (you will however, have random encounters once you start walking the route). Anyway, once we’ve finished selecting our route, we have the following: 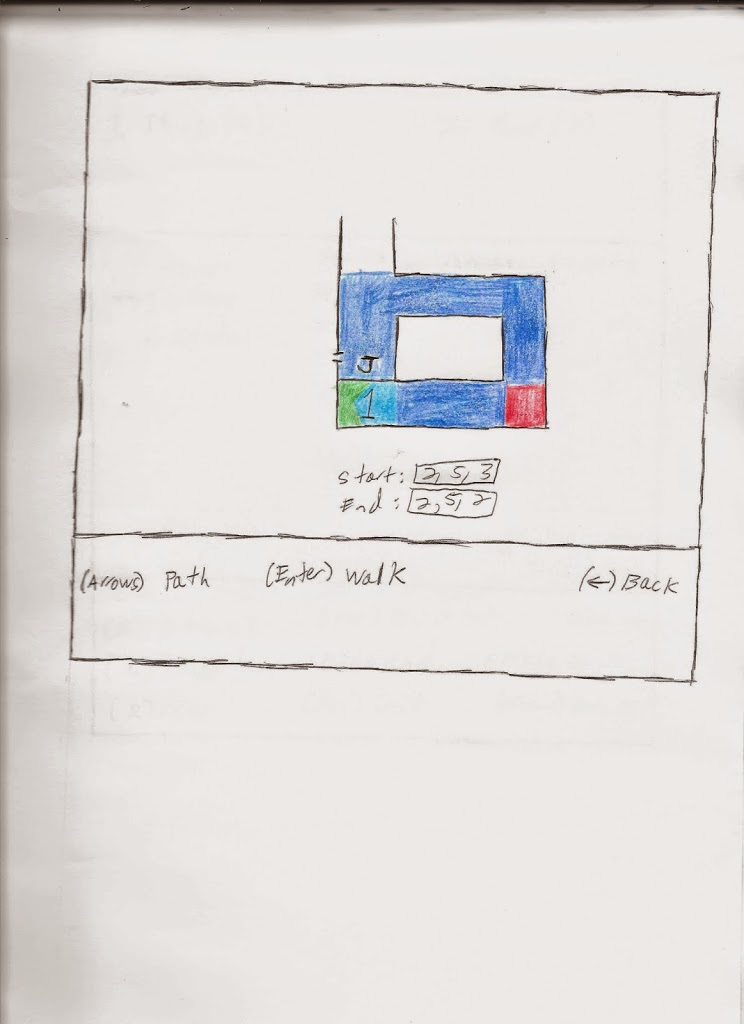 Now, suppose we hit Enter. The party starts walking the path above. Note that this is not displayed to the player. From the player’s point of view, the party will simply teleport to the desired square. However, behind the scenes, the party is traversing the dungeon one square at a time. So from the system’s point of view, travelling by a path is exactly the same as travelling manually. Therefore, once we hit the red square, we trigger combat! 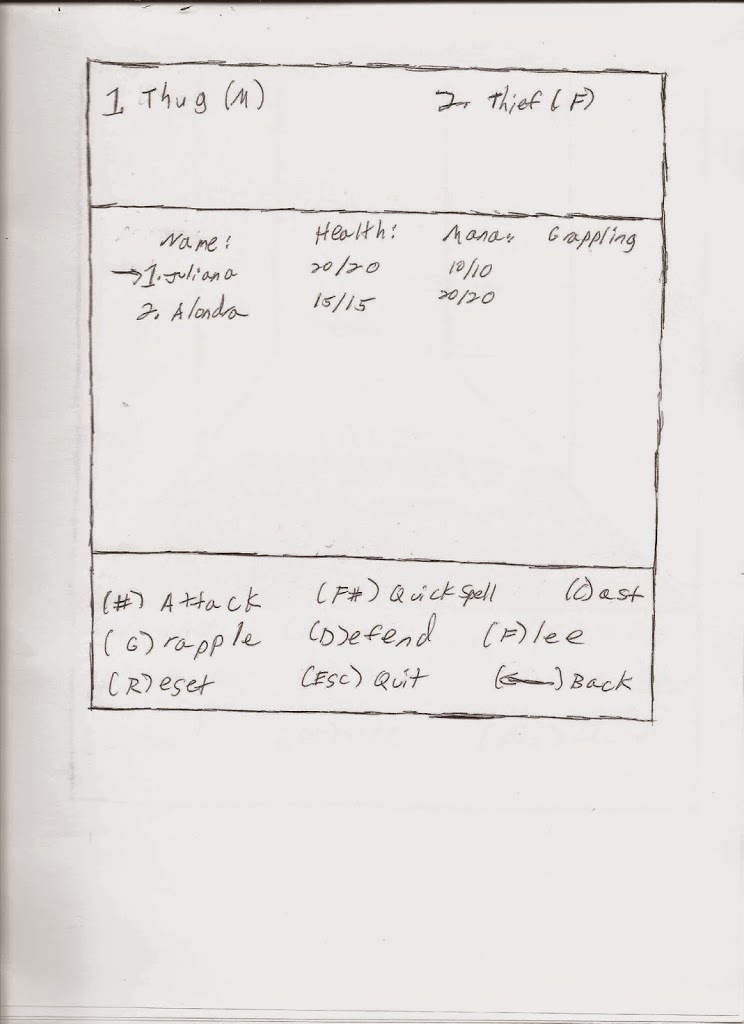 After combat, we go back to the main first person display:

Except clearly on a different square (a red square). Note the blue (W)alk command. Pressing W will resume the path. Note that the command will vanish as soon as the player moves off of the current square. However, suppose we open the automap again instead. This gives us: 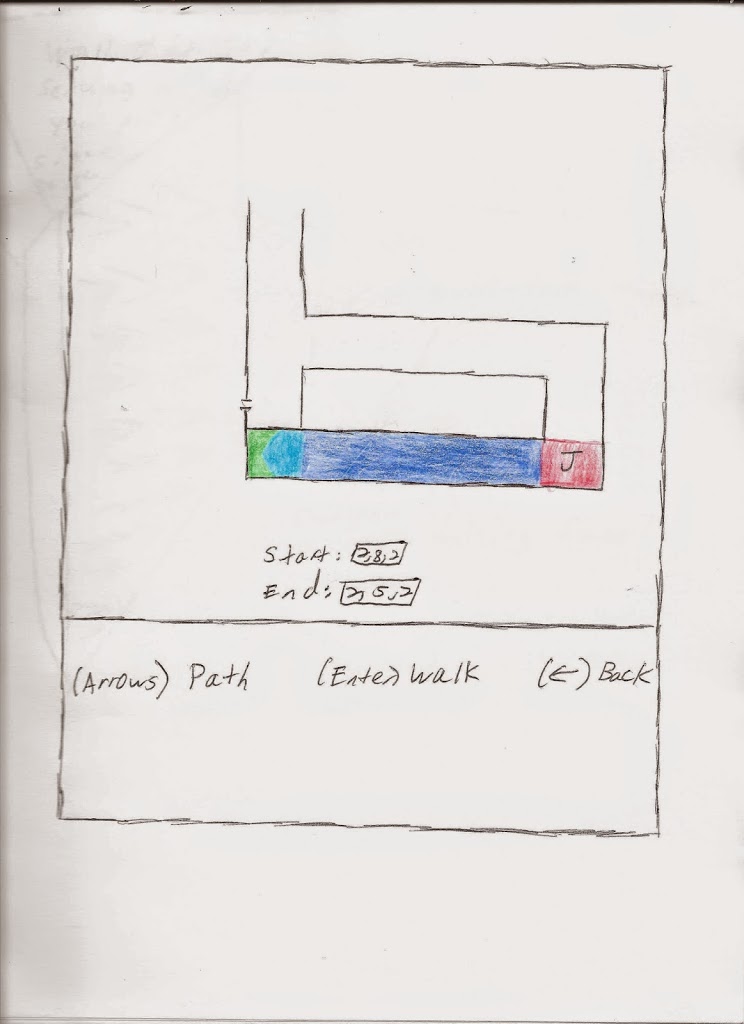 Observe that the J has now moved to the red square. Furthermore, the game has remembered the part of the route that you haven’t traversed yet.Pressing (Enter) will allow you to continue the path, the arrow keys allow you to edit it.

Your thoughts on this would be much appreciated. Also, I’ve been giving some thought to how to make combat faster without inhibiting clarity. I’m thinking that a combination of colors and sound-effects could get you the information you need, without boring lists of

But we’ll have to see. So, expect similar storyboards for a new combat interface in the coming months.