First, some good news. I’ve implemented the auto-map. I haven’t quite implemented the (G)o command yet, but that should be very straightforward. The most complicated part will be (as always) designing the interface. That being said, I’ve decided to make the game top down. I know some of you liked the first-person viewpoint (I’m rather partial to it myself), but I’m not doing this lightly. There are three reasons:

1. Topdown was a lot simpler to implement. Seriously, it’s almost absurd how much easier it was to implement. The most complicated part was implementing a notion of “dirty rectangles” that allow me to update only the part of the screen that changes. So now, when you’re exploring the dungeon you don’t get that annoying flicker every time you move. However, implementing dirty rects was much much easier than doing the same would have been for first person, because there’s a simple and obvious mapping from what’s on the screen to what needs to be updated. The first person view, with its weird angled viewpoint would have been much trickier. I even have a working sight radius (it’s still limited, the player can only see squares in the cardinal directions, but that’s good enough for now).

2. It looks better. I’ll be posting a screenshot shortly, but I think it looks better than the first person, and it should scale better to different sized monitors. I recently got a second monitor, and I was amazed how bad the first person view looked on that other monitor. I’m amazed I have any fans at all, considering how horrible it looked on anything but my original screen!

3. Most importantly: It opens up a lot of tactical possibilities. Imagine we make combat topdown as well. Then we can include positioning as a part of combat. I have a lot of thoughts about this, and most of them are only half-formed, but here’s an example of what I’m thinking about: Threatening Zones. Suppose Juliana is wielding a spear. Then she has the following Threatening Zones:

In other words, in an open field, the spear wielder is going to have a huge advantage over a swordsman or dagger wielder (which incidentally  reflects reality. Also, scholagladiatoria is an awesome resource if you’re at all interested in Renaissance era and older dueling and warfare. I’ve learned a lot  by watching their videos). However, consider something like this:

Spear in  a hallway:

Sword in a hallway:

So now, instead of the spearwielder having a +4 damage advantage over a swordsman, she only has a +2 advantage. Or even:

In which case, while the spear wielder has a +2 damage bonus while in the corner, an enemy swordsman (who presumably is not pressed against a corner) has a +2 bonus as well, so they’re (mostly) on even footing. The spearwielder does have the advantage of extra reach, but even so things are looking much better for the swordsman.

Even something this simple opens up a huge world of possibilities, because now a good chunk of combat is in trying to force your enemies into an favourable situation. Battle isn’t just about spamming your most powerful spells and attacks and hoping you kill them first, it’s about controlling the battle field. Suddenly, spells and teamwork gain a whole new dimension. You could have characters marching in formation, so enemies can’t block Threatening Zones. You could have the fireball spell scatter people, allowing you to break up formations. Spectral Push and Spectral Pull could be used to put people on different parts of the battlefield. Buff spells could speed your character up, or make it harder to move them. If you watched the video I linked to, you’d note that whoever is on the offensive is usually charging forward, while the defender is backpedaling. So you may be able to do something where attacking drives your opponent backwards and you forward, so repeated attacking could be used to drive an opponent into the corner. Throwing would also become much more useful, because you can use that to control your enemy’s position.

In fact, I would argue that something as simple as positioning provides enough depth that we can eliminate (almost) all of the randomness. In other words, attacks always hit, grapples are always successful, and spells always succeed. The only thing that would be random would be whether you successfully spank your opponent or get reversed. However, spanking itself could gain additional elements (neither the ally nor enemy can move while the spanking is going on, so a spanking could be used to disrupt formation, or as a delaying tactic until a friend can reach you). This is good, because the more I think about it, the more I think randomness is something to be avoided. It encourages save scumming rather than tactics, and it can generate all sorts of frustration (nothing like losing a close and tense combat because you missed twice in a row, while your opponent landed a pair of criticals). With randomness, things tend to boil down to spamming your most reliable attacks and hoping you get lucky.

Instead, if you eliminate randomness and instead give heavy bonuses and/or penalties based on your position on the battlefield, things become much more about controlling the battlefield, and trying to manipulate things to your advantage. However, none of that is possible with my current system, and trying to incorporate that into a first person view would be tremendously frustrating, and clunky.

So basically once I came up with the idea of Threatening Zones, I understood that making things topdown was the best choice. That being said, I won’t be implementing the new battle system until after I’ve made much more progress into Episode 2. After all, it does no good to be constantly improving things, and never releasing anything! So I’d like to at the minimum, release Act II before I start ripping out the battle system, and I’ll probably release all of Episode 2 before I change the battle system. I can fold the new battle system into the GUI overhaul I have planned between Episodes 2 and 3, so that once 3 goes live we have a brand spanking (heh) new combat system.

I’ll make a post with more information about my plans for the new battle system sometime later, maybe in April. I want my Game Design post for March to focus on something else.

Anyway, here is a screenshot of the fancy new topdown view of the dungeon: 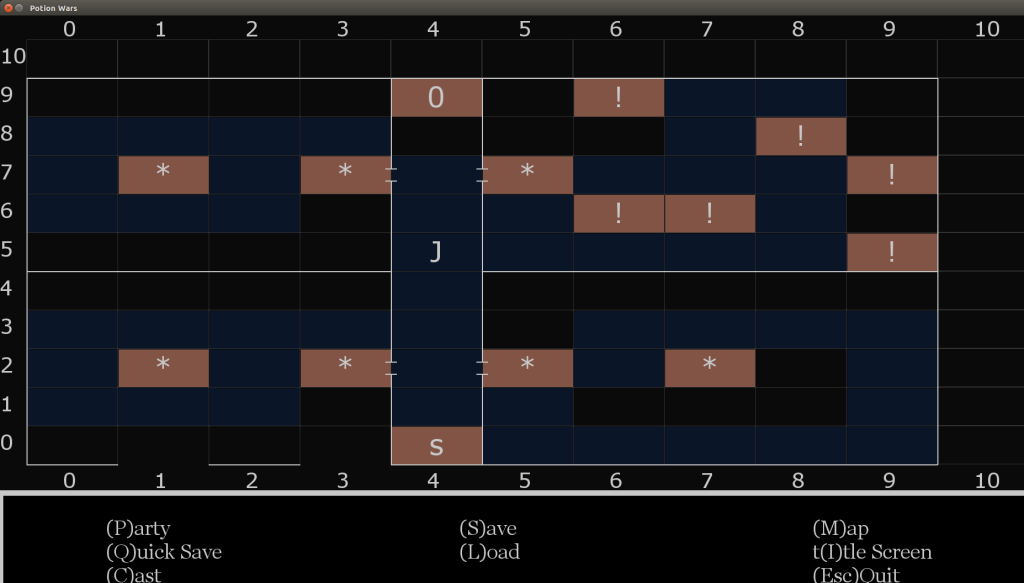 This is the first floor of the guild in episode 1. The dark grey/black squares are squares you’ve seen, but haven’t visited, the dark blue are squares you’ve visited, and the orange squares are special squares. The character in each square indicates what it is. ! indicates an enemy fountain. * is an event square. “s” is the dungeon entrance. “0” is a zero, and indicates that that square has a stairwell down to the next floor. “J” is the first letter of the PC’s name (Juliana) and indicates the player’s position. (M)ap is a relic, and will be replaced with (G)o.

Now the bad news. I’ve been doing the math, and it looks like I’m going to have to basically vanish for the month of March. I have something like two months to finish my thesis, and I have a lot still to do, and I’d rather my nose-to-the-grindstone month is not April (since it’s due at the end of April, and I don’t like waiting until the last minute. Too stressful). So I don’t know how much time I’ll have to work on this or my Etrian Odyssey Let’s Spank.

Now, I know this is probably making many of you nervous, because that’s usually how Internet projects start to die. “I’m a little bit busy now, but I’ll get back to this stuff I promise!” and then the person never gets back to it. However, let me assure you, that ugly ass blue and orange maze up there is the reason I get out of bed in the morning. I know, that sounds weird, and obsessive and maybe kind of sad, but that’s how it is. I’ll have a few weeks in May after I graduate before I start my job, and I intend to spend at least one of those weeks (the other will be spent visiting family) working on this game and my Let’s Spank the way I want to: all day, every day. With the occasional break to play Lords of Xulima, of course. Got to know the field if you’re going to contribute. So trust me, as much as it’ll suck for you guys that I won’t be doing hardly anything with this in March, it’ll suck just as bad for me, and nothing short of death is going to stop me from continuing to work on my game. Hell, the reason why I’m getting the hell out of academia in the first place is because it’s a horrible, soul sucking wretch of a place that demands far too much of my time. In other words, I wouldn’t have enough time to spend working on my game! So progress may slow to a crawl, but I won’t be stopping. Even if my work in March consists of a little bit of thought about the game mechanics and nothing more, it won’t stop.

One thought on “March Update”